When I was last at Baldessin Press a decidedly unsentimental artist admitted to me that she talks to George Baldessin whenever she’s printing on his big mechanical press. ‘I never knew the man, but I always say as I press that button, well George what have you got for me this time?’ It was one of those quirky conversations that suddenly encapsulates something about a place: in this case how the spirit of George Baldessin still animates the work that happens in the bluestone studio he built at St Andrews some fifty years ago.

The ‘big press’, as everyone calls it, was designed and built by Baldessin with a special grant from the Australia Council and the application carried an endorsement from John Brack, who wrote ‘the work done on it would be, I am quite sure a significant contribution to Australian art’. Brack was prescient, it seems, as the press is now at the heart of Baldessin Press and Studio, a bustling enterprise begun by Baldessin’s widow, Tess Edwards Baldessin, that this year is celebrating it’s 21st anniversary.

To celebrate that anniversary the Press, in conjunction with Australian Galleries, has staged two shows—one focussing on Baldessin’s work and the other focussing on the work which continues to emerge out of his studio more than four decades since his death in 1978 at the age of 39.

The ‘big press’ is indicative of the scale and ambition Baldessin brought to printmaking in the 1960s and ’70s. As Elizabeth Cross, one of his first students at RMIT, has recalled: ‘The term printmaker barely existed in the mid-sixties. Fred Williams was a painter who made prints. Likewise, George Baldessin was a sculptor who made prints.’

One of the delights of the current Baldessin show is to see this connected spectrum of work with sculpture, painting and prints shown side-by-side. One of the largest pieces of sculpture in the show, Personage, window and factory smoke (1966) shows this connection directly with the head of the ‘personage’ etched into aluminium like a printmaking plate and her legs extending sculpturally from the flat plane. This sculpture, won Baldessin a travelling scholarship that enabled him to explore the printmaking tradition of Japan, which was to have a lasting influence on his work. The personage, the window and the factory reappear in a series of prints into the early seventies, where Baldessin extends his play with figure and enclosure; the act of seeing; and the merging of the personage with their environment.

An early comment by Baldessin about his own work in a letter to print scholar and curator Daniel Thomas seems to hold good for much of his work: ‘I am interested in the human figure as a vehicle for expression – what am I trying to express – I think human weakness through the vulnerable figure without extracting its dignity no matter how uncertain. This is why distortion and the element of drama is ever present.’

Baldessin manages to achieve this sense of vulnerability not only through his striking compositionhis characteristic performative figures—and the fluidity of his line, but by his formal control and technique that allows him to produce textural softness as well as depth with the richness of his aquatinted backgrounds.

Baldessin Studio: The Legacy, the second exhibition, features twenty-eight artists who have worked with or produced work at the studio in recent years. Here the legacy of George Baldessin’s formal innovation continues with a dynamic presentation of contemporary printmaking practice, from linocuts, to mokulito, to hybrid digital prints.

If the human figure is key to Baldessin’s printmaking, it seems that the natural world is the dominant concern for many of those in the legacy show. This ranges from the precise black and white engraving of a tree by Rosalind Atkins, to the eery multilayered photogravure forests of Sophia Szilagyi or the ‘intimations’ in the abstract monoprint of Angela Coombs Mathews.

What is striking is that, while the work is diverse, just under half of the artists have used some kind of digital process in their platemaking or printmaking, often combining a range of techniques. The ariel view of outback tidal flats, revealing the snaking nervous system of the land, by Baldessin studio manager Silvi Glattauer, for example, is from a photogravure plate of an original photograph printed onto hand-drawn but digitally produced watercolour backgrounds. Glattauer’s pioneering work in digital techniques for photogravure and hybrid printmaking is clearly in evidence through many of the artists in the show who have worked with her.

Strangely, this is most in evidence in the beautiful work of Brent Harris, which is in no sense photographic. Harris worked with Glattauer to create photogravure plates for his 2021 series of fourteen prints, The Stations. They follow the traditional narrative of Jesus ‘stations of the cross,’ and see Harris’ revisiting the subject matter he originally explored in 1989. Produced during lockdown and only seen at the time in an online viewing, it is exhibited live here for the first time. Here the photographic process has captured both the striking blocks of solid black as well as the delicate charcoal smudges and fine pencil lines of Harris’ original drawings. Each piece in the series is printed onto a soft hand painted pink watercolour background. The choreographed spaces of this new version, alternate between enclosure and openness signalling an engagement with both human mortality and human hope.

George Baldessin and Baldessin Studio: the legacy are both  at Australian Galleries Melbourne until 12 November.

Marcus O’Donnell is a Melbourne academic, artist and writer. He has printed at Baldessin Press and has recently joined its committee of management. 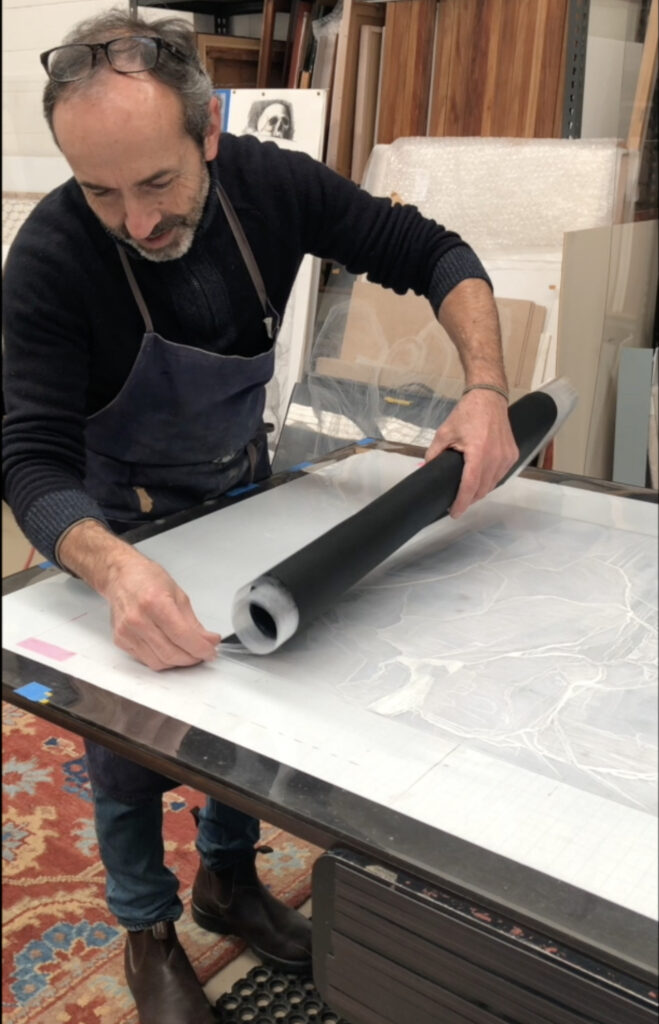