Dr. Thomas A. Middlemost discusses the work of Belinda Fox in her new exhibition.

The Australian Print Workshop Collie Print Trust Printmaking Fellowship and exhibition is an annual grant for a leading contemporary artist to work with master printmakers at APW using workshop machinery, to develop a major body of work in the print medium.  Belinda Fox is the nineteenth invited artist to participate, and twelve monoprints were printed for the fellowship.

Fox is foremost a printmaker. She is intrinsically a politically conscious, humanitarian, collaborative printmaker, and inveterate traveller. This has led her to a hybrid practice which includes ceramics, glass, large-scale installation pieces, painting, and an ever-growing body of work on paper. The constantly evolving depicted views that she punctiliously produces are shaped by personal peculiarities, politics, place, and people.

The view outside the window of the artist, or her collaborator’s, appears in the work as a tree with yellow bark, children, birds, a mountain, prayer flag, or a certain flower. Her mind is teeming with images of carpets, and tanks, games and helicopters, of spiritual places, textures, and obsessive line work.

Fox left Australia in 2012 and returned in 2020 just before Christmas at the height of the lockdown in Melbourne. She and her family were in Singapore for four years and The Hague for four and a half, and she is generally well-travelled.

I have known Fox’s work since 2002 when she was a participating artist in the yearly  Print Commission run annually by the Print Council of Australia, in which she winning The Silk Cut Acquisitive Award for Linocut Prints in 2004 (or possibly I saw a CD cover print of her work that reminded me of a Joy Division album cover – memory is sometimes elusive).

The collection I curate in the Charles Sturt University Art Collection holds four of her works from 2003-2007, including: Nekorwa S/F, 2003, a spit bite, and drypoint etching and chine colle; ‘undercurrent’, 2005, a watercolour, linocut, and intaglio on paper work, ‘Hide + Seek VI (version 2)’, 2006; and the six-metre wide, laser cut MDF work of helicopters ‘Double-take’, 2007 generously donated by the artist through the Commonwealth Governments Cultural Gifts Program. A work that toured in the University of Tasmania: ‘This is not a print’, exhibition, and incorporated linocut, flocking, photocopy and acrylic. There is not one straightforward etching or linocut amongst them, therefore, I’m not surprised that her work in this exhibition entails a list of complex procedures that rely on greasy inks, etched line, and great pressure. For these works, three master printers were involved: Fox, Martin King, and Simon White. These are mainly[1] monoprints not monotypes, and I feel it’s useful to understand the difference.

I completed my doctorate in the history of the Australian monotype, the simplest of print methods. When I asked Fox in March 2009 if she printed monotypes she said: “Re monotype, of course I would be interested in doing such a thing but as my idea of monotype is quite ‘wide’ you better give me some Tom-style definition!”[2]

Which I did: I quoted that a monotype is a unique painted or inked impression transferred from an un-incised and unregistered matrix. I possibly went on to say read Rasmusen[3] and his expansive monotype definition… but, that’s my succinct definition, that doesn’t particularly mention methods and media.

In 2015 Fox made two monotypes and brought home fourteen plates to work[4] on from the Chiang Mai Art on Paper Studios in Thailand under instruction from Kitikong Tilokwattanotai. Fox refined this method in Greece on residency, and showed many works that expanded this technique two years later in Deng Haag in the Netherlands in May, and Melbourne in June 2017 as the ‘Connector- fragments’ series.

The hybrid monotype technique is described by Fox as involving litho plates, dry point and watercolour, a technique that can be extended to lino.[5] She says they are a “labour of love” and while she would like to edition the work, she gets “caught up in the uniqueness of printmaking and end up with nothing I can edition!”[6]

These monotype methods are further refined in this exhibition of monoprints. All the works include a broken line that cleaves the imagery, it bifurcates the vessel, cuts the flower or bird, and is coloured like a sunset. The cut is reminiscent of the art of ‘Kintsugi’ the gluing of ceramics with gold; making them stronger.

Fox’s Cultivate exhibition at Arthouse Gallery in Sydney in June last year was about new beginnings after coming home from a long time away. The series started with Korean moon jars, made in a traditional method, a type of pot where two hemispheres are moulded together, a collaboration with Neville French, which was started before she left for her extended overseas relocation. There were three monotypes in the show, and a marvellously broken pot boldly exhibited as if in a state of constant explosion.

The join in the centre of these pots is a focus in the prints in this APW show, and for Fox the connection represents her homecoming, her life overseas, and here, now joined, and at times fractured, imperfectly sealed. And it also represents the two collaborators: ceramicist and printmaker meeting to make more than they can alone.

Coming together at APW, with this calm, complex exhibition will go some small way to help heal the damages inflicted by the pandemic and the consequent lockdowns – a healing where the wound is evident as a scar, but useful and contemplative.

[1] Included in the exhibition are two APW editioned etchings entitled ‘Coming & Going’, 2022 along with the monoprints.

Dr Thomas A. Middlemost is an art historian with a particular interest in monotype printmaking. He is Art Curator for the Charles Sturt University Art Collection and a PCA committee member.

A dreamy poem and the idea of a secret wish inform Amanda Donohue’s ‘Private Thoughts’. 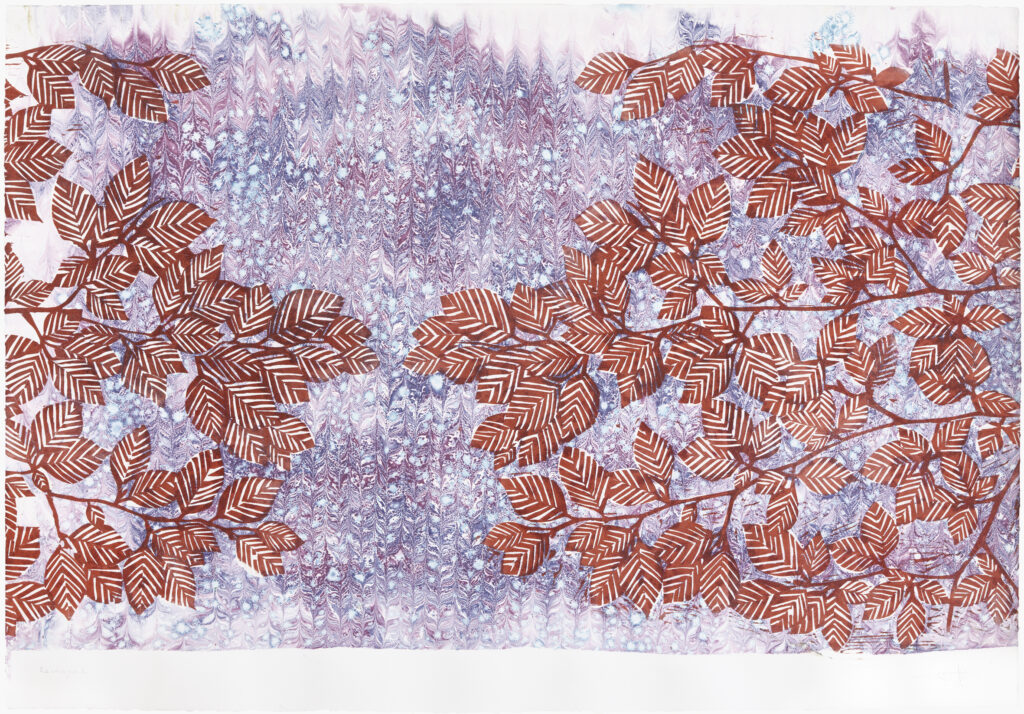